The semifinals of the Sheetz Holiday Classic will be highlighted by clashes between wrestlers from AA and AAA, with a 132-pound bout among the most intriguing.

St. Joseph’s Academy’s Caleb Dowling was listed as one of th 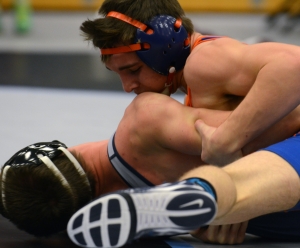 e Top Incoming Freshmen, and he hasn’t disappointed, with a 5-0 start to his career and a St. Marys Kickoff Classic title to his name. But the No. 6-ranked wrestler at 132 in AA will face his biggest test yet on Saturday at Mount Aloysius University in Cresson.

Tunkhannock’s Tommy Traver is the top seed at 132 pounds after going 38-10 as a freshman last season. He is ranked eighth at 138 in AAA.

The semifinals were originally scheduled for 11:45, but the start time likely will be pushed back by winter weather that is supposed to be worst during the morning.

Brackets and results can be found on FloArena.

Hazleton Area leads the team race after Day 1 of the Sheetz tournament with 98.5 points. St. Marys and Woodbridge (Virginia) are tied for second with 86 points each and Altoona is fourth with 85. Archbishop Wood rounds out the top five with 82 points.

About the Author: Eric Knopsnyder

Eric covers wrestling for The Tribune-Democrat in Johnstown and has written for a number of other publications through the years. A former Division I wrestler, he's covered more than a dozen PIAA tournaments and four NCAA tournaments. His Knops Knotes blog focuses primarily on Districts 5 and 6.